Almost any kind of lily – Asiatic, Oriental, LA hybrid, and even the daylily — can be adapted to container gardening and will usually perform well. The problem that most people have with growing lilies in containers, however, is that most of these lilies can grow to be quite tall – up to 8 feet. There are several dwarf varieties, though, mostly Asiatics and Orientals that grow to be only 24 inches tall and are ideal for growing in containers, leading to their common name of “pot lilies.”

Some Dwarf Lilies Include:

‘Snow Leopard’ (Asiatic): A creamy color with lots of freckles.

‘Rodolpha’ (Oriental): White is always pretty in the garden, and this clear white version with slightly ruffled petals is no exception.

Dwarf lilies may be difficult to find at many local gardening centers. Some are not labeled as “dwarf” either. You will have to check the height on the package of bulbs. Ideally, you should only choose those lilies that will not reach over 24 inches.

One word of warning, however, some greenhouses classify some lilies such as the Asiatic lily called ‘Lollypop’ as a dwarf. I have also seen some places where the Asiatic lily ‘Cancun’ is classified as a dwarf, as well. I have both of these lilies, and they grow to be at least 5-feet-tall in my garden.

You can grow these in containers; however, you will have to place them where they are protected from the wind if they become too tall. 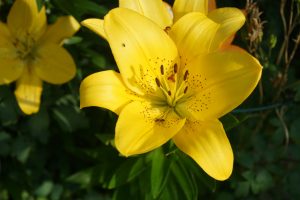 Once you have chosen the dwarf lilies that you would like to plant, you will then need to choose the appropriate container. You want containers that are large enough to be filled halfway with soil and which still leave enough room for you to plant the bulbs 4-6 inches deep.

Do not use regular garden soil in your containers. It can become too compacted, resulting in your lilies being deprived of moisture. Instead, use a good potting mix that offers good drainage such as Miracle-Gro. A 64-quart bag will cost around $10.47 at places like Lowe’s.

You can buy smaller bags for around $5.00 and up; however, if you are planning on potting up several lilies, you will come out ahead buying the larger bag.

Lilies are big feeders, which means that they need to be fed regularly during their growing season. If you did not purchase a potting mix that included a slow-release fertilizer, you should mix in a handful of slow-release granular fertilizers into the soil. (Once again look for Miracle-Gro.)

If you do not use a slow-release fertilizer, you can use a balanced fertilizer or even a fertilizer designed for tomatoes and apply every two weeks from the time that new growth starts to appear in the spring until the late summer/early fall.

Keep in mind that container plants need to be fed regularly because they cannot draw nutrients from the ground. You will know if your lilies are not receiving enough nutrients by the leaf color. If they have good leaf color, they are fine. If not, they are either hungry or you have too large a bulb planted in too small of a container.

Do not overwater your lilies. Waterlogged lilies will rot. I allow mine to dry out a bit between waterings and then give them a good soaking. (In the summer, this usually means watering them about once a week.)

If you have any doubts about whether or not it is time to water, stick your finger in the soil. If it is dry, water. If it is wet, do not water. I also mulch my potted lilies, which not only helps them to retain water but also helps to keep their roots cool.

As winter approaches, move your potted lilies into a cool, airy place with good light. (Do water them just a little during the winter.) You do not want them to freeze, since potted lilies can die if left out in temperatures below zero. You can also bury the pots in the ground and dig them up in the spring. If you do this, be sure to mulch them for winter protection.

Advantages Of Growing Lilies In A Pot

Growing lilies in pots allows you to move them to areas where they will have the biggest impact. It also allows you to hide them away once they have finished blooming and while you wait for the stalks and leaves to die back naturally as they draw in nutrients for the next season’s blooms.

If you are having problems finding dwarf lilies in your area, there are a couple of good online greenhouses/nurseries that offer good selections. Some offer several dwarf Asiatic lilies. One final note: Many dwarf lilies will have the name “Pixie” included in their description; e.g., ‘Orange Pixie’ as mentioned above. When you see this, you know that you are getting a dwarf.

Q: How do I know when my lilies are ready to be divided?

A: If you have a potted bulb, it should need to be divided every two or three years. When the growth slows down and the leaves turn yellow, it is a sign that it is time for a division.

Q: What types of lilies in the Asiatic and Oriental category do well in pots?

A: Most will grow well in containers. Among my favorite container lilies is ‘Isla’ (the light orange one), which has a long flowering period and perky blooms.

As for Oriental lilies, they tend to prefer more sun than Asiatics.

Q: What is the best way to divide lilies?

A: Divide the bulb first by cutting through the roots and about half of the bulb. The second cut can be made anywhere from below the lowest leaf nodes down to the heel where the bulb’s root system starts, but it does not need to go any deeper than that. If you cut your lily too deep, the bulb will divide into many small bulbs instead of one big one.

How Long Does a Leather Sofa Last? (5 Upkeep Suggestions)

How To Grow Green Onions From Seed (Step By Step Guide)

Tags: How To Grow Dwarf Lilies

How To Grow Lemon Tree From Seed (Step By Step Guide)

How To Grow Peppers From Seeds (Beginners Guide)

How To Care For Outdoor Ferns In Pots