3 Of The Best Marlin Fishing Destinations In The World

Marlin fishing has been regarded as the ultimate angler’s experience since the 20th century. Hemingway’s most famous story – The Old Man and the Sea – is about an aging fisherman and his quest for a huge, legendary marlin. While Hemingway’s story is set in Cuba, it isn’t the best marlin fishing destination in the world.

The first place for that prize is a hotly debated topic among anglers, but there are a few names that come up frequently. In this article, we’re going to take a look at some places that provide the best marlin fishing experience to anglers all over the world.

San Juan is one of the closest fishing destinations to the US, only a two-hour journey from US cities on the East Coast. Anglers can find blue marlin in the clear waters of this US territory, especially in summer. The fishing season for blue marlin extends from early June to mid-October. If you visit within that period, you’re virtually guaranteed to land some spectacular blue marlin.

The population of blue marlin here is huge, and the specimens here are much larger than ones found in other fishing destinations. The San Juan International Billfish Tournament is one big annual attraction that is the oldest billfish tournament in the world. The event happens in September, and anglers from all over the world head to San Juan to take part. 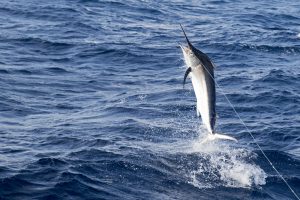 The fact that it’s a US territory means you won’t have to worry about visa restrictions or passport paperwork. Just book a ticket and head to this beautiful coast where the ocean views are second only to the wonderful fishing opportunities here. There are skilled crews readily available for hire and lots of options when it comes to chartering a boat.

The nightlife is vibrant and enjoyable, so you can unwind after a hard day’s fishing with some well-earned cocktails or dancing. The hotels are great, and the restaurants provide a wide range of seafood prepared by skilled chefs from all over the world.

On the whole, we found San Juan to be the best marlin fishing destination in the world. A place that’s perfect for anglers, with blue marlin in large numbers offshore and a fun atmosphere to come back to and relax after your fishing expedition is over. We would highly recommend this fishing destination to anglers looking for a place to catch marlin.

Cairns is the best place for marlin from mid-September to late January. This fishing destination is a few minutes boat ride from the Great Barrier Reef, which is one of the biggest breeding grounds for black marlin.

Anglers can charter boats from Port Douglas or Cairns that will take them to the offshore fishing spots where the marlin are. The fishing area begins from Lizard Island and extends all the way to Cairn’s coast. Giant black marlin – heavier than 1000 pounds – are the true angler’s prize in these waters. More of these huge fish are caught in these fishing grounds than anywhere else on the globe. 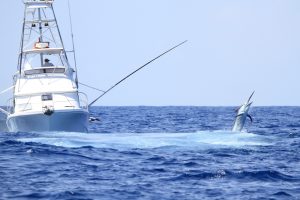 Most fishing tours also offer scuba diving along with fishing for marlin. An underwater tour of The Great Barrier Reef is one of the most unforgettable experiences a person can have. When you charter a boat, you will get a skilled crew along with experienced guides who can point out the prime fishing spots and advise you on fishing techniques.

There are lots of options when it comes to chartering a vessel in Cairns, and there are a few factors that you need to consider. The more expensive boats are larger – up to 55 feet – and fitted with a complete array of modern equipment. They have underwater cameras and sonar systems to give anglers an extra edge. There will also be lots of entertainment options and food cooked right there on the open sea.

There are cheaper charters available as well, which will typically be smaller vessels with fewer extra options. So, anglers can choose whichever charter fits their budget in their quest for the prized black marlins.

Cabo San Lucas holds the world record for most marlin caught per hour, so if you head here, there’s little chance that you won’t be able to catch one for yourself. Once a quiet fishing village, it has now become one of the most popular fishing destinations in the world.

Cabo San Lucas is one of the few places in the world where marlin are caught year-round. Striped marlin are found here from early September to late March, and black marlin take their place from early June to mid-October. So regardless of when you arrive here, you’re guaranteed to find some species of marlin. 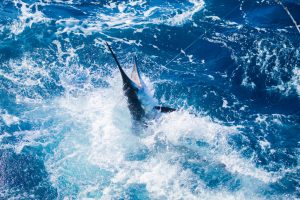 The weather is always pleasant in Cabo San Lucas, regardless of which time of year you schedule your visit. So you don’t have to worry about rainstorms and the like disturbing your fishing expedition.

There are lots of wonderful restaurants here that specialize in preparing seafood with famous Mexican spices. So when you go out for a bite, you are guaranteed to have an unforgettable culinary experience. The fishery also has plenty of bars where anglers can gather and boast about their catches while enjoying some tasty liquid refreshment.

The nightlife is rich as well, with shops frequently staying open all night. The general atmosphere here is one of a never-ending party. But if you’re looking for something quieter, you can head to the beach and simply lay back and relax.

Twenty years ago, Cabo San Lucas was an ordinary fishing village, but a lot has changed since then. Thanks to enthusiastic anglers, it has become a prime tourist destination. Now there is a wide range of hotels, restaurants, shops, and bars that will ensure that a visitor lacks for nothing here.

There are plenty of fishing destinations around the globe to choose from, but these three are definitely at the top of everyone’s list. Whether you’re an angler seasoned in tackling marlin or are just learning to fish, you’re sure to have a great trip here no matter which destination you pick. Just make sure that you’re well prepared and leave no stone unturned in your quest for the big fish.

How To Crochet Socks (Complete Guide)

Knitting for Beginners (A Detailed Guide)

A Beginner’s Guide to Fishing